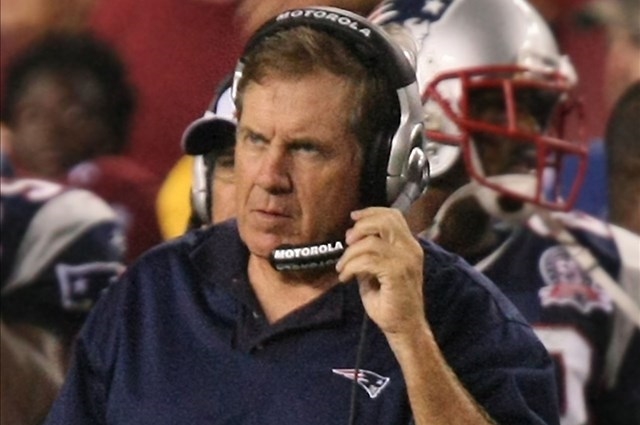 I have no personal feelings towards Bill Belichick. In fact, while Belichick coached the Cleveland Browns, I made quite a bit of money on him in that game versus the Dallas Cowboys, oh so many years ago, when he had Leroy Hoard carrying the ball and Vinny Testaverde throwing the pigskin.

I loved Belichick’s coaching philosophy, hard running and defense first, and respected his football mind. Having come from the Bill Parcell’s mold, how could you not respect the guy? He even looked like an Austin Power’s mini-me version of the Big Tuna with his oversized sweat-shirts, and I don’t care to get the hair coiffed for primetime attitude.

But, this is just crazy. Cheating in any sport is bad enough but cheating in the NFL – – I’m just not sure what to say about it. The reason it is so difficult to swallow, but appears to be so true, is that the NFL is the league of Vince Lombardi and Paul Brown. This is the league that single-handedly created modern television, as both an advertising medium, and as a national rallying point for Americans everywhere.

Sundays around the tube, switching back and forth between games, falling asleep during the second game after your sixth beer, is an American tradition. More of a tradition, at this point, than the World Series or the Presidential Election.

We are a football nation and the NFL is our golden boy. There is absolutely nothing in this country that describes us better than the NFL. The NFL is capitalism and socialism combined, freedom and indentured servitude, the goals of the individual having to coincide with the goals of the many to breed success. We see our national identity in the NFL – – that’s how much football means to us.

That, of course, is why the revelation that the New England Patriots, and Bill Belichick in particular, cheated in their NFL games hits us so hard. And, if it doesn’t, then we need to rethink our values.

This is worse than the NBA gambling scandal, than Michael Vick, than Adam “Pacman” Jones, or Tank Johnson. This is worse because those four jumps off the moral trail were done by individuals for selfish individual reasons much like Jean Valjean, at least in Tim Donaghy’s case, stealing bread so he can survive in the sewers of Paris.

No such allusions regarding the New England Patriots. They just wanted to win and they decided, or at least Bill Belichick decided, that doing whatever it took to win was the way to go.

I’ve always felt that the Patriots’ Super Bowl win versus the Rams and then the Panthers and then the Eagles looked strange. That the way they could beat the Colts in the playoffs, when nobody else could even tough Peyton’s teams, was sort of off. That the “genius” label assigned to Belichick was assigned to soon and under somewhat strange conditions.

In the New York Giant’s Super Bowl win versus the Buffalo Bills, Bill Parcells proved what a terrific coach he was. That was the coaching skills of a genius – – pumping the ball to O.J. Anderson forty times, letting Thurman Thomas and Andre Reed run all over the field, but never letting them get too close to the end-zone – – keeping them away just long enough to get the lead in the fourth quarter – – and then praying that Scott Norwood will miss the field goal – – doing it all with a second-string quarterback in Jeff Hostetler.

That was genius. Now, in light of the revelation that the Patriots cheat, what do we say about Bill Belichick? We can’t really call him a genius, can we? Can we even call Tom Brady a hall-of-fame quarterback?

Make no mistake, the Patriot are cheaters. If they did it against the Jets in the first game of the season, they certainly attempted it in those Super Bowl wins. And, no, I for one am not going to give the Patriots the benefit of the doubt.

This is an effort by one of the most storied franchises in America’s most treasured sport to cheat. Are you kidding me? Without a doubt, if these allegations are correct, the architect and any person involved in the New England Patriot’s organization who knew about this, sans any players, should be banned from the NFL for life.

Owner Robert Kraft – – if he knew about this, then the other NFL owners need to force him to sell the team. That’s right, banned for life.

Hey, if Shoeless Joe Jackson still isn’t allowed into the baseball hall-of-fame, the least the NFL can do is make a statement about cheating in America’s most cherished league.

The NFL owes it to us football fans.