You are here: Home / Architecture / The Architect's Mask 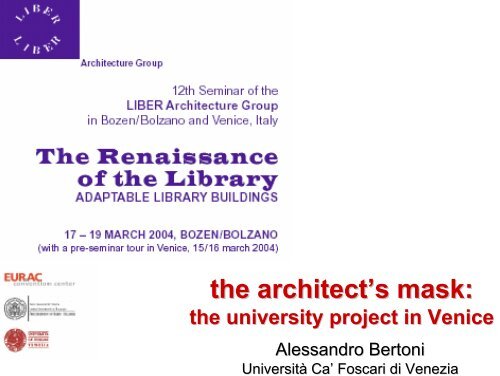 Architecture historians and theorists alike have noted that participating through distance is the architect's realm. Traced back to ancient Greek theater, audience emotions participated by their witnessing a holistic plot of humanity via the actors on stage. Here was the beginning of perceiving distance, seeing the world in its totality. As an architect, drawings and models mitigate distance from what is actually to be built; emotions of the actual-to-become are mitigated through his or her imagination. An architect's mystique maybe found in his or her ability to transcend time and space, where the architect's mind is focused on what will never actually become. The "will never" is the ideal.

What the architect has is his gaze, grasping for the ideal at a distance. Architecture is required for his gaze; a particular "mask" is required for his existence in the community. The architect offers a mask, his "mask", reflecting his distance by literally reflecting the community back to its inhabitants. The "mask" is not worn on his face. Instead, it is worn by the architecture he resides within. It is a wall, separating him from others, all the while creating the illusion of depth on a pure plane. He is an alchemist by creating depth on a pure plane, a plane of light, reflective, a mirror. This is one of the most important tools for an architect and this tool physically establishes the line between him + others.

A community is soon to be realized by the sea. This community contains one architect. For professional and ideological reasons, he does not physically participate with the community he is creating. For the architect, his secret knowledge is preserved by bisecting a peninsula separating himself from the community's inhabitants, placing them on the mirror's reflective side, the side that places them on an "island". The architect faces the mainland. He also requires an equal portion of land that the inhabitants reside upon. Not to confuse this situation as one that places the architect as a feudal lord, he works at the same scale of the community, of the actual, and thus needs a reflected plan to work on. A dual community exists. The architect's side is what is to become and the inhabitant's is what is actually realized. But the actual is bound to the ideal's illusion of depth, always reflected on the architect's "mask". His gaze is separate from the actual.