You are here: Home / Architecture / The Mixing of Architectural Styles in Mexican Churches 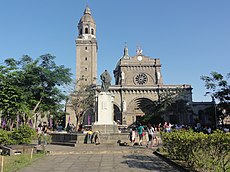 Some of the many things that can bore me nearly to death, or at the very least put me into a slumber coma, are soap operas, American baseball, American football, most sitcoms, anything having to do with Microsoft and Bill Gates, and listening to George Bush speak. The one thing in the world that never puts me to sleep is the subject of Mexican churches. It’s become a passion of mine since moving to Guanajuato, Mexico, and I never tire of visiting the scores of churches in the cities we visit. In fact, I end up spending more time in the churches than I spend at most of the other tourist sites in Mexico, especially in the colonial cities. I never tire of them!

The vast majority of Mexico’s colonial churches were designed by European architects. In their designs, they very liberally adorned these churches with elaborate and luscious old-world flare in their designs. In many of the churches, some within day-trip distance from Guanajuato (like Silao, Dolores Hidalgo, and San Miguel de Allende), you can see the Gothic, Baroque, and Moorish (Arabic) influences in both the church facades and the interiors.

Influences from the local Mexicans’ designing hands can also be seen in some of the works that ended up presenting sometimes a “watered down” version of the European influence and sometimes a grand stylistic enhancement when the locals’ interpretative designs were mixed with traditional designs. There are several churches in Mexico with a mixture of the local and the traditional. One such example is in San Miguel de Allende.

The present day La Parroquia was an original colonial church. In the 19th century, a local architect and builder, Zeferino Gutiérrez, was hired to redesign and rebuild the towers and the general façade. Myth says that he had only a postcard of a Gothic church to use as a model. He worked from this to design and build the towers and façade. The result is an eclectic mixture of Gutiérrez’s interpretation of European Gothic design. It is a magnificent church, which the locals hold in the highest regard even if it perturbs the anally retentive architectural aficionados.

Most of the Mexican churches, as well as their European counterparts, follow the basic traditional design in which the churches, if viewed from the air, look like crosses. The part where the altar resides is called the nave. This comes from the Latin word, navis, meaning “ship”. (You might want to know that the longest church nave in America is in an Anglican church in New York City – 230 feet.) From the box-like nave there usually emanate cross-spaces or transepts that extend from it and create the impression of a cross. If the church has a choir loft, it is usually in the back above the main entrance.

As I am writing these words, I am standing in a plaza, Plaza Cihuapilli, in the heart of an ancient town that is filled to the brim with artisans and is called Tonalá, which is located in the state of Jalisco. I am trying to make up my mind which of the churches to visit first. The two I want to see are at opposite ends of the plaza creating a startling visual effect. Both of these churches break the usual Baroque mold of the churches you find in colonial Mexican cities. Both are fine examples of the eclectic mix you may find in churches depending on where you visit in this wonderfully mysterious country. I picked the Parish of Santiago Apostle to see first.

The Parish Church of Santiago Apostle is said to be of an architectural style that exemplifies the art and science of building and construction. It is an attempt to present a form and design that stresses the simple over the complex. It is a style that tries to emphasize how well constructed the building is rather than showing the elaborate decoration you see in the early and later Baroque styles. This describes perfectly the front or façade of this church. In one source I read, it called the façade “austere” and indeed it was. The interior has what you expect in colonial Baroque churches: the magnificent pillars reaching high to the vaulted ceiling held together with those fetching arches. It has a neo-classical altarpiece. Outside, there is a quarry monument in front of the church dedicated to Pope Pius the IX*, built in 1887. The church was a project built by the Augustinians in 1652.

The second church I visited, Sanctuary of the Sacred Heart, is located almost directly opposite the Parish of Santiago Apostle Church on Plaza Cihuapilli. The tourist office information lists one of the parishioners, Jamie de Anesagasti, as the architect. It was constructed over a former hospital in the late 19th century with an exterior in the Gothic style and a Renaissance interior. The façade is a brilliant yellow with white Gothic spires and towers housing bells. (The only two pigeons we saw in the park area were sitting below the spires.) Four square columns glisten white across the front. Two statues sit on either side of the front entrance. Emanating out of the medieval period, Gothic was a style of architecture sandwiched between the Romanesque and the Renaissance periods. This style included the pointed towering spires and aches, vaulted walls containing buttresses to reduce the stresses (load) on the vault wall.

The Sanctuary of the Sacred Heart’s interior contains some impressive Italian oil paintings of the Stations of the Cross. I found those very appealing within the walls of the Renaissance interior. What was absolutely jarring was the supposedly “lovely retablo” sitting behind the altar of this church. In the popular guidebook I mentioned previously, the author actually used the word lovely to describe a nightmarish display sitting in an otherwise fine example of a mixture of Gothic and Renaissance architecture. What went on in the mind of the artist or artists who made this thing is inconceivable to me. What is really frightening is what was going on in the minds of whoever approved it for public consumption in a church.

Basically, the idea of this atrocity is Jesus Christ standing on a massive gray cloud that is engulfing the earth. But, the whole thing looked like something more appropriately placed in a skating rink somewhere and not a church. The life-sized Jesus was the usual pearly white-faced depiction of Christ. Then the so-called cloud looked like a giant piece of Styrofoam that someone heated way too long, causing it to crinkle and curl into something twisted, gray, and monstrous looking. It looked like what the Jolly-Green Giant’s brain would appear like if you saw a surgically removed section of it. Then, the beach-ball earth that was not so much below the hideous giant brain-looking cloud formation as it was engulfed by it, looked like something you would find in an adolescent’s skating rink (made by a talentless adolescent) with strobe lights shining on its little gold-sticker stars that were pasted all over it.

Whatever this was supposed to be, it surely did not fit into a Renaissance interior. The Renaissance style was supposed to be an architectural emphasis upon “symmetry, proportion, geometry and the regularity of parts.” This appeared to me to be a mixture of styles that was beyond the pale.

What this display did was jar you to your architectural soul.

A lovely retablo? Maybe. There’s no accounting for taste!

* A popular Guadalajara guidebook lists this monument as dedicated to Pope Pius the XI as does the map you can get from the tourist office in town. However, it clearly says Pope Pius the IX on the monument.